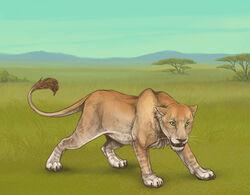 From a year of age and onward, cubs are considered adolescents. They have more independence than a younger cub, however they are still not productive members of the pride yet. Adolecents are more mature and no longer need a denmother to look after them, however, they still take up a 'cub slot' and may not be bred / passed down to.

If you like an adolescent, but are disappointed by its gender, you can always use a cub sex changer from the Oasis for 1 Golden Beetle (GB) to switch it to the opposite gender. However, the item is no longer able to be applied once the lion has hunted or patrolled. 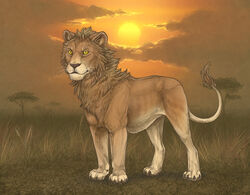 An adolescent becomes an adult at the age of 2 years, or after 24 real life days. Upon aging up, females will remain in the pride and begin to take up a territory slot; therefore if there is not enough room in the pride, they will be chased off. If there is an available Subordinate Male slot, a male will automatically claim it at 2 years of age, if there is no spots available, then they will be chased off.

Retrieved from "https://lioden.fandom.com/wiki/Adolescent?oldid=7132"
Community content is available under CC-BY-SA unless otherwise noted.